This case came before the Supreme Court following earlier proceedings at the High Court and Court of Appeal. Two designs were at issue (pictured, left to right): the ‘Trunki’, Magmatic’s Registered Community Design (RCD), and the Kiddee Case by PMS, in various iterations, including one in the manner of a tiger and another similar to a ladybird, for which it was accused of infringement of Magmatic’s design rights. 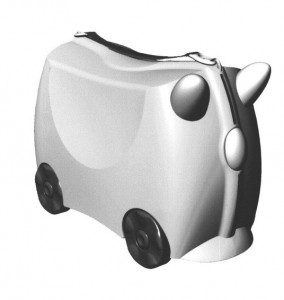 Rob Law, the founder and director of Magmatic, had come up with an initial suitcase design as part of a winning entry in a design competition in 1998. This design was eventually incorporated into the Trunki in 2003. Mr Law had risen to prominence after appearing on the popular entrepreneurship programme Dragons’ Den, where he turned down an offer from the Dragons but went on to secure a contract with John Lewis. The Trunki was sold as a mid-market to premium product. PMS, aware of the Trunki, began to produce the Kiddee Case, a discount version, in 2010.

At the High Court, Arnold J found in favour of Magmatic, considering that the overall appearance of the Kiddee Case shared the “slimmer, sculpted, sophisticated, modern appearance, prominent ridge and horn-like handles and clasps looking like the nose and tail of an animal” common to the RCD.

In the Court of Appeal, Kitchin LJ reversed Arnold J’s decision, finding that, whereas the RCD looked “as a whole, like a horned animal”, the Kiddee Case was “a tiger with ears.” Further, Arnold J had failed to recognise the role of the contrast of shades between the black wheels/strap and lighter body of the RCD. Thirdly, Arnold J had not properly taken into account the importance of surface decoration, or an absence thereof.

The task of the Supreme Court was to evaluate whether the Court of Appeal was right to reject Arnold J’s decision on this basis. Much of the case hinged on the interpretation of computer generated design drawings. Were the unadorned flanks of the RCD meant to indicate a positive absence of ornamentation, or was the design simply intended to protect the shape of the product? Was the colour contrast of the wheels and strap, as Magmatic claimed, merely an incidental consequence of the use of the CAD software, or should it be considered a constraint on the RCD’s scope of protection?

In considering these matters, Lord Neuberger returned to the basic rules and regulations for the filing of Community Designs. The design applicant is entitled to choose the level of detail which he incorporates in his design and accordingly sets the level of generality at which it should be considered. Citing Lewison J in Procter & Gamble v Reckitt Benckiser, Lord Neuberger repeated that “if [the applicant] chooses too general a level, his design may be invalidated by prior art. If he chooses too specific a level he may not be protected against similar designs.” Moreover, the applicant was free to file as many designs as he wished, and as such the possibility was open to him to protect all permutations of his design at all levels of detail.

Assessing the findings of the Court of Appeal, Lord Neuberger agreed on all three counts.

The Supreme Court then considered ornamentation, finding that it should be taken into account insofar as it reinforces, counteracts, or interferes with the overall impression of a given design. Nothing in the RCD detracted from the horned animal impression, and the ornamentation of the Kiddee Case confirmed that it was a tiger with ears.

PMS had also argued that the absence of ornamentation on the Trunki design should be understood as restricting its scope of protection to unadorned designs- an absence of surface decoration meant no surface decoration- rather than protecting designs of a similar shape regardless of whether they had surface decoration. The Supreme Court would not be drawn on this point, considering it unnecessary for the purposes of the case at issue. However, Lord Neuberger added that absence of decoration certainly could be considered a feature of a registered design, given the value “notoriously” placed on simplicity and minimalism in design. As such, “it would be very curious if a design right registration system did not cater for it”. It was affirmed that the monochrome nature of the RCD covered all colour variations.

In assessing the contrast of colours in the RCD, Lord Neuberger found that the “natural inference is that the components shown in black are intended to be in a contrasting colour to that of the main body.” This made another important contribution to the differing overall impressions of the designs.

Summing up, Lord Neuberger confessed some regret that Magmatic’s registrations were not sufficient to reward its evident innovation. However, he was only able to judge the case on the rights before him, and noted that the appeal was “not concerned with an idea or an invention, but with a design.”

Simply put, the CAD drawings submitted of the design were not sufficient to afford a monopoly of the sort that Magmatic desired. Given the differences in the designs, a judgment favouring Magmatic would have been equivalent to protecting the idea behind the product, rather than the specific appearance of the product as set down in the design registration.

This case highlights that the scope of protection of a given individual design may well be narrow. However, a broad scope of a protection for a product can be achieved through filing well thought-out drawings, possibly through a suite of registered designs, each showing differing levels of detail. The actual appearance of Magmatic’s ‘Tipu Tiger’ Trunki (pictured) is arguably much closer in appearance to the Kiddee Case than the RCD and so further designs including the tiger-like ornamentation may well have been more successful for Magmatic. Overall, careful and critical assessment of the scope of designs being registered is required to enjoy the full benefits of design registration. 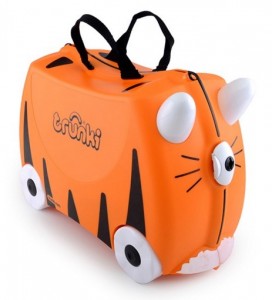 The OHIM’s broad acceptance of different image types, including line drawings, CAD and photographs, and attractive discount pricing for multiple design filings can be seen to promote use of the design system in this way. Often, single design registrations of a product are of limited value. However, well-planned multiple design registrations to cover a single product can provide powerful intellectual property rights.

If you require further information on anything covered in this briefing, please contact Charles King (cking@withersrogers.com ; +44 207 940 3600) or your usual contact at the firm.