You are here: Home > News > Football and patents

As the UEFA Euro 2020 and Copa América come to their conclusion, the use of technology on and beyond the pitch is more common than ever. It’s worth having a look at some of the patents protecting the latest innovations, from VAR and player tracking, to football balls and football shoes.

Few developments in football have been as controversial as VAR. Although a lot support a system that ensures controversial referee decisions are reduced, and teams are not unfairly treated, the author appreciates that the beauty of the game for fans partially lies in those controversial moments, as Diego Marantona would surely confirm (English fans’ opinion may vary).

VAR is based partly on Hawk-Eye Innovations’ patent shown below, WO 2001/041884 A1, which describes (using cricket as an example) how the output of four video cameras can be used to accurately map and predict the flight path of a ball and whether the ball interacted or would interact with any features, for example the goal line. 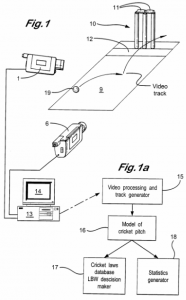 One of the disadvantages of VAR has been the delay it adds in making a decision. FIFA hopes to address these issues at the upcoming Qatar World Cup with Artificial Intelligence (AI) wherein the AI would be used for better limb tracking to create a semi-automated offside system. Although no published patents seem to describe such a system yet, we hope linesmen take notice and adjust their career plans accordingly.

Another similar system commonly used is described in WO 2014059971 A1. This patent describes a GoalControl system that uses multiple cameras directed towards to the goal posts with special equipment embedded in the goal posts that enable tracking of the ball.

One may think that the football itself may not have changed much from the early days of football, but they would be wrong. Although generally a football consists of two parts, an outer shell and a rubber inner inflatable bladder, evolution in materials has enabled these layers to change to improve the performance of the ball. FIFA has very strict rules for the physical properties of the ball, but few restrictions on its specific structure, which leaves a lot of space for innovation.

One attempt to improve the speed of the ball is showcased in US 4,830,373A, shown below, where instead of the common pattern of polygons on the surface of the ball, a combination of stars and hexagons were used that resulted in a more gripping surface, which could improve the player’s grip on the ball. 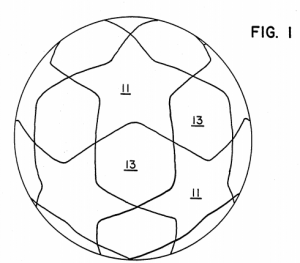 Another example is US 2004/0213984 A1 by Nike, below, which describes a football with multiple linings, where the inner layer is made from polymer foam processed with a nitrogen blowing agent which makes the ball more pliable and to able to withstand the shots in a top-level match. Keep in mind that Cristiano Ronaldo has been known to shoot the ball at about 117km/h, so anything that helps the ball handle such kicks can make a massive difference. 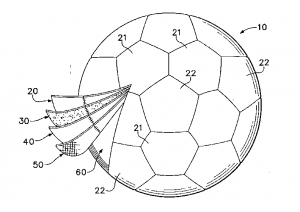 One of the first patent applications directed to a football shoe was filed in November 1887 in the UK, with reference number 15,836, and described the shoe shown below: 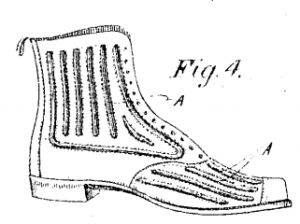 The application described a “boot having ribs” that protected the foot of the wearer. Since then of course, athletic footwear has evolved significantly. For example EP 1359819 B1, shown below, describes a shoe that improves the spin of the ball thanks to protrusions embedded on the sides of the front of the shoe. 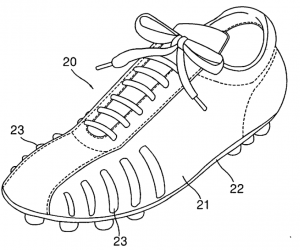 Interestingly, the illustration provided above seems to also indicate such protrusions, leading one perhaps to wonder whether the modern shoe below is perhaps not as novel as one would originally think.

Of course these are only a few examples of how patented technologies that can improve football. Numerous applications describe improved versions of player or goalkeeper clothing, data analysis and visualisation that improve our understanding of what happened during replays, and even changes to the pitch itself, on the grass on top of which the game is played.