You are here: Home > News > Michael Jaeger unpacks HMRC’s report on the initial uptake of the UK’s Patent Box

The UK’s Patent Box came into effect on 1 April 2013. Under the scheme UK companies are able to pay a reduced rate of Corporation Tax on certain profits derived from patented technology. HM Revenue & Customs (HMRC) published its first report¹ on the uptake of the scheme on 14 September 2016, and that report includes a number of notable statistics, which are discussed below. This article considers the published figures and considers their relevance in the wider context of Corporation Tax revenue.

It has taken a while

The report details the number of companies benefiting from Patent Box and the extent to which they have done so in the first year of the scheme, namely the fiscal year 2013-14². More than two years have passed since the end of the fiscal year under consideration. Why has it taken HMRC such a long time to compile a report on the take-up of the scheme?

The reason for the delay in reporting on that year’s Patent Box claims is as follows. Companies are able to notify HMRC that they wish to benefit from Patent Box within two years after the end of the accounting period in which the relevant profits arise³. This means that where a company’s fiscal year ended on 31 March 2014, it could have filed a Patent Box claim by 31 March 2016, which makes the delay understandable. However, if a company’s accounting year runs in parallel with the calendar year then for the year 2014, the first three months of which coincide with the last three months of the first year of Patent Box’s implementation, the company would have been able to claim Patent Box relief until the end of 2016. For such companies it appears that the HMRC’s report may be premature, rather than late. One must conclude from the release of the report that HMRC believes that the majority of companies who intend to claim Patent Box relief for the 2013-14 fiscal year had done so by the time that the report was compiled.

Timeline for the next report

The report states⁴ that HMRC is considering if it will be feasible to publish provisional statistics gathered only one year after the end of the relevant fiscal year. This would mean that by autumn 2017 we should have sight of full figures for the 2014-15 fiscal year as well as provisional figures for the 2015-16 fiscal year. Presumably HMRC is confident that the bulk of the Patent Box claims will have been made within 12 months of the accounting period in which the relevant profits and income arise, reinforcing the final point made in the previous paragraph.

A drop in the ocean

When the scheme was first proposed, the Government undertook an impact assessment, in which it forecast that the fiscal impact of Patent Box would be £500m in the 2013-14 fiscal year⁸. Since the actual figure for claims was only 69{e27634494e39db391c4a3c1babcce9c96667e0da0c02f00a98e80c871bbff07c} of the anticipated figure, this shows that take-up was lower than expected.

In a similar vein, a mere 700 companies⁹ claimed Patent Box relief. This is a drop in the ocean when considering that 1,117,780 companies¹⁰ paid Corporation Tax in 2013/14. This means that only 1 in every 1,600 of the Corporation Tax paying companies took advantage of the Patent Box scheme.

Whilst there is no doubt that the bulk of UK companies do not set out to be innovative and are consequently unlikely to be eligible for the scheme, this nevertheless represents a further indicator of disappointing take-up.

The average amount of Patent Box relief claimed by small and micro-sized companies was £17.6k and £7.5k respectively. There is a direct cost involved in qualifying for Patent Box relief, namely the cost of applying for, obtaining and maintaining a patent. An argument presented in favour of pursuing Patent Box relief is that if the benefit received over the life of the patent is greater than the cost of obtaining and maintaining a qualifying patent then it makes financial sense to take advantage of the scheme. Since on a simple level an annual benefit of £7.5k equates to a benefit of £75k if the patented product has a life of ten years and double that if it is maintained for its full term, it can be surmised that the threshold for choosing to pursue Patent Box relief requires a clear financial benefit beyond the argument referred to above. 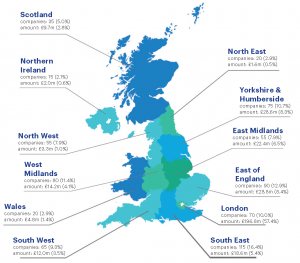 The charts above show the amount claimed by each industry. When comparing these charts one striking feature is the relatively larger amount of Patent Box relief claimed by companies in the Information & Communication, Financial & Insurance and Real Estate industries sectors. This equates to an average Patent Box relief of £218k per company in this sector.

Section 3.3 of the report provides a breakdown of how companies in different regions claimed Patent Box relief. This regional data is shown in the table above. The regional data can be shown graphically as set out above. What is apparent from these graphs and figures is that the amount claimed by the 70 London-based companies makes up the majority (57.4{e27634494e39db391c4a3c1babcce9c96667e0da0c02f00a98e80c871bbff07c}) of the claimed Patent Box relief. In this regard the report notes that the regional distribution data is skewed, since companies can have a single address for tax purposes (for example, a headquarters’ location) even though they may have operations across the UK.

It is of note that across the North East, Scotland, Wales and Northern Ireland only around 90 companies claimed Patent Box relief.

The report provides a window onto the take-up of Patent Box relief in the first year of its introduction. However the need to anonymise some data has made that window more obscure than would be desirable.

One thing that is clear from the report is the number of companies benefitting from Patent Box is disappointing. Whilst it is natural for there to be a slow adoption of a new tax scheme, factors such as the drop in the main Corporation Tax rate²⁰ and the introduction of a more restrictive revised Patent Box scheme²¹ are disincentives to the uptake of the scheme which should be countered by increased Government action to encourage the uptake of Patent Box.

This article was first published in the CIPA Journal, December 2016, Volume 45, Number 12.

If you require further information on anything covered in this briefing, please contact Michael Jaeger (mjaeger@withersrogers.com; +44 207 940 3600) or your usual contact at the firm. This publication is a general summary of the law. It should not replace legal advice tailored to your specific circumstances.