Data1 recently released by HMRC indicates that relief claimed under the Patent Box scheme in the 2018-2019 fiscal year increased by only 2.6% from the previous year, suggesting that companies are still missing out on huge savings in corporation tax.

What is the Patent Box scheme?

The Patent Box enables companies who have patented their own innovative technologies, or who have exclusively licensed-in patented technology, to apply for a reduced rate of corporation tax of 10%. This benefit applies to worldwide profits derived from a patented product or process, and includes profits from sales in countries where no IP rights exist.

To be eligible for the scheme a company must:

Despite the name, the scheme is not solely restricted to patents. Companies holding other intellectual property rights, such as plant variety rights and supplementary protection certificates (but not trade marks or registered designs), can also take advantage of Patent Box.

Don’t have a Patent? Why not file one?

Patents are conventionally used to defend a territorial monopoly, preventing commercialisation of an innovative product by third parties. However, the utility this brings is difficult to quantify and most right holders are reluctant to engage in the costly business of litigating their rights in the courts. Moreover, many believe that patents can only be granted for revolutionary ideas, and that the day-to-day product development performed by most companies is not patentable. However, this is not so.

Firstly, patents (and other forms of IP) can be a source of revenue. Patents, like other forms of IP, are tangible assets that can be sold or licensed. Just because one company does not intend to exploit a given innovation, does not mean another company would not desire the opportunity to do so. Secondly, the requirements for patent protection often only require marginal improvements over known systems.

It is important to remember that tax savings on profits will often more than offset the cost of obtaining a patent. Different strategies can be employed to take advantage of the scheme, depending on the size of a company, commercial priorities, and budgets available. Broad protection is not necessary to qualify for tax relief, and a UK patent application comprising narrow claims to cover a new and inventive product, for example, may facilitate swift prosecution to grant and a cost-effective route to accessing the relief.

Similarly, it is possible to accelerate or slow down patent prosecution depending on commercial requirements and budget availability. There are a variety of ways of expediting prosecution at the UK Intellectual Property Office (UKIPO) or European Patent Office (EPO).

For the period 2017-2018, just 1,305 companies claimed tax relief through Patent Box. HMRC data suggests that relief claimed for the 2018-2019 fiscal year will have increased from £1,101 million to an estimated £1,130 million, once all late claims have been analysed. This is despite there being 3,770,022 companies on the UK register in March 2018, not including those subject to liquidation or dissolution3. Whilst it is acknowledged that the bulk of UK companies do not set out to be innovative, all indications are that utilisation of the scheme is poor, particularly by small and medium-sized enterprises (SMEs).

So why, when the potential for almost a 50% reduction in the rate of corporation tax is on offer, has the uptake of this scheme been so low? The number of patent filings does not appear to explain the data, because whilst the number of patent applications at the UKIPO dropped to 19,250 in 2019 from 20,931 in 2018,4 applications increased at the European Patent Office by 4% to 181,406 in 2019,5 with UK-originating applications at the EPO also increasing marginally.

One in five applications to the EPO is by an SME; however, Figure 1 shows that the vast majority of value claimed was by large companies in 2017-2018, despite a larger portion of small (and micro) companies signing up for the scheme. Manufacturing companies, and those based in the South East and London also represent the largest proportion of companies making a claim; by a significant margin. 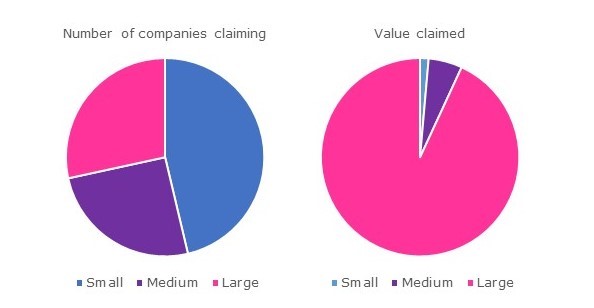 Even if your company does not own any patents, if it is involved in R&D activity, you may want to consider speaking to a patent attorney. Otherwise, you could be missing out on valuable tax breaks.  It is also worth noting that eligibility for the scheme will not be impacted by Brexit.

When considering potential cost-saving measures, other important sources of funding for Research & Development are government-funded cash grants issued by Innovate UK. Regular calls for applications are promoted throughout the year (see here) and target a wide range of technology.

R&D tax credits is another HMRC incentive designed to drive UK-based innovation and can be applied to any activities in science or technology leading to an advance in knowledge or overcoming a scientific or technological uncertainty (see here). From the perspective of SMEs, it is possible to claim retrospectively for the two years previously, a claim could be processed in as little as six weeks, and in the latest government review (see here), up to 30 June 2020, £5.3bn of R&D tax relief support had been claimed for 2018-19, corresponding to £35.3bn of R&D expenditure. The scheme was opened up to larger companies in 2002, and from the launch of the R&D tax credit schemes in 2000-2001 until 2018-19, over 300,000 claims have been made by UK businesses and £33.3bn in tax relief claimed.